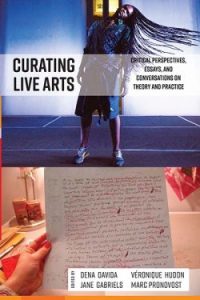 Situated at the crossroads of performance practice, museology, and cultural studies, live arts curation has grown in recent years to become a vibrant interdisciplinary project and a genuine global phenomenon. Curating Live Arts brings together bold and innovative essays from an international group of theorist-practitioners to pose vital questions, propose future visions, and survey the landscape of this rapidly evolving discipline. Reflecting the field’s characteristic eclecticism, the writings assembled here offer practical and insightful investigations into the curation of theatre, dance, sound art, music, and other performance forms—not only in museums, but in community, site-specific, and time-based contexts, placing it at the forefront of contemporary dialogue and discourse.

“The outstanding group of researchers in this innovative book engage in a lucid flow of passion and creative power. Its narratives are drawn from experimental approaches grounded in their authors’ rich lives. This anthology is comprised of unexpected revelations about curation that break the barriers of its canonic definitions, while remaining concerned with Beauty as a fundamental value and the live arts as a celebration of living.” • Alma Salem, independent curator, Syria Sixth Space

“This is a rich, global compilation of pieces that explore issues of power, community, inclusiveness, belonging, aesthetics, history, embodiment, epistemology, and pedagogy, all within the context of performance and the live arts.” • Nicole Stanton, Wesleyan University

“In seeking to reinvigorate one of the art world’s most ubiquitous terms, Curating Live Arts both interrogates and celebrates the historical in tandem with new possibilities for intervention into the complex space between artists, arts workers, art projects, participants and audiences. It asks critical questions about the values, the sensibilities, and the preoccupations of curating the live arts, and includes writing from artists, curators, and activists working in politically urgent contexts far removed from the centres of ‘high’ art. This wide-ranging anthology makes an invaluable contribution to the complex aspirations of this ever-expanding field.” • Sarah Miller, University of Wollongong

“What stands out in the volume is that many of the authors envision curating as based on the ethics of care – caring for the artist, caring for the community, caring for the world around. This notion of curating as caring casts it as a critical, (self)reflective practice accompanied by certain responsibilities and is grounded in the critique of neoliberal ideology that treats arts as a commodity.Anyone interested in the significance, purpose, or agenda of curating and curators in performing arts should read this book … The curators promoted here are not rock stars, they don’t wear expensive designer clothing or hang out with celebrities, but they are deeply committed to their work, to the artists they work with, and to the communities they serve.” •  Barbora Příhodová, thINKingDANCE blog, for full article see http://www.thinkingdance.net/articles/2019/04/19/3/Curating-as-Caring-Curating-for-Live-Arts-Contribution/

” The book contains so many and varied inspirational insights that you can get lost in these tonal soundings from the netherworld of arts practice … What emerges is a map of the sheet dynamism of curating, an art form in and of itself … The intergenerational, multicultural contributors from places as diverse as Nigeria, Singapore, the Caribbean, Egypt, and the Philippines reflect a kind of bridging of past and present, as well as a search for the undefined, shifting borders that frame the future of the arts … The interviews, essays and experiential testimonies covered in this survey of curating performance and dance will instruct readers about the essence of hybridity of curation in an era of migration and transformation.” • John K. Grande, Vie des arts 254, p. 88

PROLOGUE Bethinking One’s Own Strengths: The Performative Potential of Curating by Florian Malzacher

A NOTE ON CURATORIAL STATEMENTS. A THIRD SPACE: CHASING
THE INTANGIBLE by Michèle Steinwald and Michael Trent

CHAPTER 1 From Context to Concept: The Emergence of the Performance Curator – by Bertie Ferdman

CHAPTER 3 Can We Curate Dance without Making a Festival? On Dance Curatorship and Its Shifting Borders – by Elisa Ricci

CHAPTER 5 The Curating Nation: Emergence of Performance Curation in Singapore and Its Impact on Cultural Politics – by Ken Takiguchi

CHAPTER 7 More Weirdness, More Joy: Performance Curation and Pedagogy at Danspace Project and the Institute for Curatorial
Practice in Performance – by Judy Hussie-Taylor

CHAPTER 10 Noticing the Feedback: A Proposal to the Contemporary Dance Field, and/or This Revolution Will Be Crowdsourced – by Michèle Steinwald

CHAPTER 11 Email to a Curator: An Introduction to The Curators’ Piece – by Tea Tupajić and Petra Zanki

CHAPTER 12 Curation as a Form of Artistic Practice:
Context as a New Work through UK-based Forest Fringe – by Deborah Pearson

CHAPTER 13 The Artist-Curator, or the Philosophy of “Do-It-Yourself” –  by Julie Bawin

CHAPTER 14 Being in the Vanguard of Sensibility: Artists as Curators in Performing Arts—a Study of Collective Affect – by Kasia Tórz

CHAPTER 17 Because I Love Art, I Want Art to Be Different: The Project Perverse Curating and a Few Things I’ve Learned from It – by Jacob Wren

AS WE | Nadège Grebmeier Forget

CHAPTER 22 A New Kind of Critical Elsewhere – by Travis Chamberlain

THE TITLE AS THE CURATOR’S ART PIECE | Steve Giasson

CHAPTER 27 Framing a Network, Charting Dis/Courses: Performance Curation, Community Work, and the Logic/Anxieties of an Emerging Field – by Roselle Pineda

CURATION AS A PRACTICE OF RADICAL CARE: A DEFINITION | Nicole L. Martin

CHAPTER 33 The Curator as a Culture Producer – by Marta Keil

CHAPTER 36 Are You Not Entertained? Curating Performance
within the Institution – by Rie Hovmann Rasmussen

CHAPTER 38 What Can Contemporary Art Perform? And Then Transgress? – by Emelie Chhangur

EPILOGUE Situation Critical: What Comes Next for the Field of Performance Curation? – by Tom Sellar

Comprising 15 essays by Canadian writers and scholars, Renegade Bodies is a book that embraces lively discussion about artistic and cultural shifts along with the social and political transformations of the 1970s. How were dance and its practitioners affected by the vigorous and varying beliefs, the principles and key societal trends of the times?

During the decade, dance literally exploded onto the scene as audiences, worldwide, flocked to performances. The times were defined in Canada by public debate inspired by second-wave feminism, gay rights, multiculturalism, separatism and nationalism. And dance finally found an intellectual home in universities across the country.

Renegade Bodies: Canadian Dance in the 1970s queries how the art form contributed to and was informed by this dynamic zeitgeist. From, for example, Newfoundland’s spirited cultural revolution, to the sometimes frictioned start-up of dance degree programs in Canadian post-secondary institutions, to the artists who challenged the status quo at 15 Dance Lab, to the ground-breaking and liberating performances in a gay Vancouver night club, to the infighting within the country’s first dance service organization … readers get fresh insights into the characters and conditions of the times.

The writers provide insightful, sometimes surprising and always thoughtful accounts of dance during the 1970s – presenting a lively record of a lively time and bringing a pivotal decade in the country’s cultural history into sharp focus.

Read Dena’s chapter Like cactuses in the desert: the flourishing of dance in Montréal universities in the 1970s

Fields in Motion: Ethnography in the Worlds of Dance

This premier anthology of ethnographic stories from around the world examines the deeper meanings and resonances of artistic dance in contemporary culture.  The twenty-eight dancer-scholars in this volume have ventured out into the fields of their own dance communities (and in some cases of their own lives in dance) to witness and investigate what people do and say inside the studios and theatres of these professional dance worlds.

These ethnographic and autoethnographic narratives bring an insider’s insight to the various accounts of the nature and function of these artistic practices, giving voice to dance teachers, dancers, creators, programmers, spectators, students and scholars. The book spans five continents, and this group of authors is also intergenerational, with texts conceived by both young and by well-established dance researchers.  Writing genres range from vividly poetic to meticulous, sober research reports.  The twenty-four chapters are grouped into four areas:  methods and methodologies, auto-ethnography, pedagogies and creative processes, and choreographies as cultural and spiritual representations.

Fields in Motion brings together twenty-eight scholars interested in approaching dance from an ethnographic perspective.… What makes the book special is that the contributors all focus largely on theatre dance, rather than on other genres more embedded within circumscribed communities, generally the domain of anthropologists specializing in dance. Although Joann Kealiinohomoku showed us the way in the late 1960s and 1970s by demonstrating that all dances are culturally rooted, art dance still remains, for many, beyond ethnographic enquiry since it is often perceived as ‘outside culture.’… The authors take us on exciting journeys and the reader enters the worlds of dancers, spectators and researchers in a variety of social and cultural contexts, sometimes with great intimacy, at other times with more detachment, but always with heightened sensitivity. Reading allows for discovery of the many ways in which dancing bodies may be socially and culturally mediated so that our understanding of theatre dance gains greater nuances. – Andrée Grau, Roehampton University

This collection of ground-breaking scholarly research points to a new direction for both dance studies and dance anthropology, arising from the postcolonial predicament:  ethnography at home in the art worlds of dance.  Traditionally the exclusive domain of aesthetic philosophers, the art of dance is here reframed as cultural practice and its significance is revealed through a chorus of voices from practitioners and insider ethnographers.

Buy Fields in Motion at WLU Press, Amazon.com, and Indigo.

Introduction: Anthropology at Home in the Art Worlds of Dance | Dena Davida (Canada)

1. Shifting Positions: From the Dancers’ Posture to the Researchers’ Posture | Anne Cazemajou (France)

4. The “Why Dance?” Projects: Choreographing the Text and Dancing the Data | Michèle Moss (Canada)

5. What is the Pointe?: The Pointe Shoe as Symbol in Dance Ethnography | Kristin Harris Walsh (Canada)

7. The Body as a Living Archive of Dance/Movement: Autobiographical Reflections | Janet Goodridge (England)

12. How the Posture of Researcher-Practitioner Serves an Understanding of Choreographic Activity | Joëlle Vellet (France)

19. The Bridge From Past to Present in Lin Hwai-min’s Nine Songs (1993): Literary texts and dance images | Yin-ying Huang (Taiwan)

21. Spectres of the Dark: The Dance-Making Manifesto of Latina/Chicana Choreographies | Juanita Suarez (USA)

22. Not of Themselves: Contemporary Practices in American Protestant dance | Emily Wright (USA)